Assurance: The Holy Spirit and Security 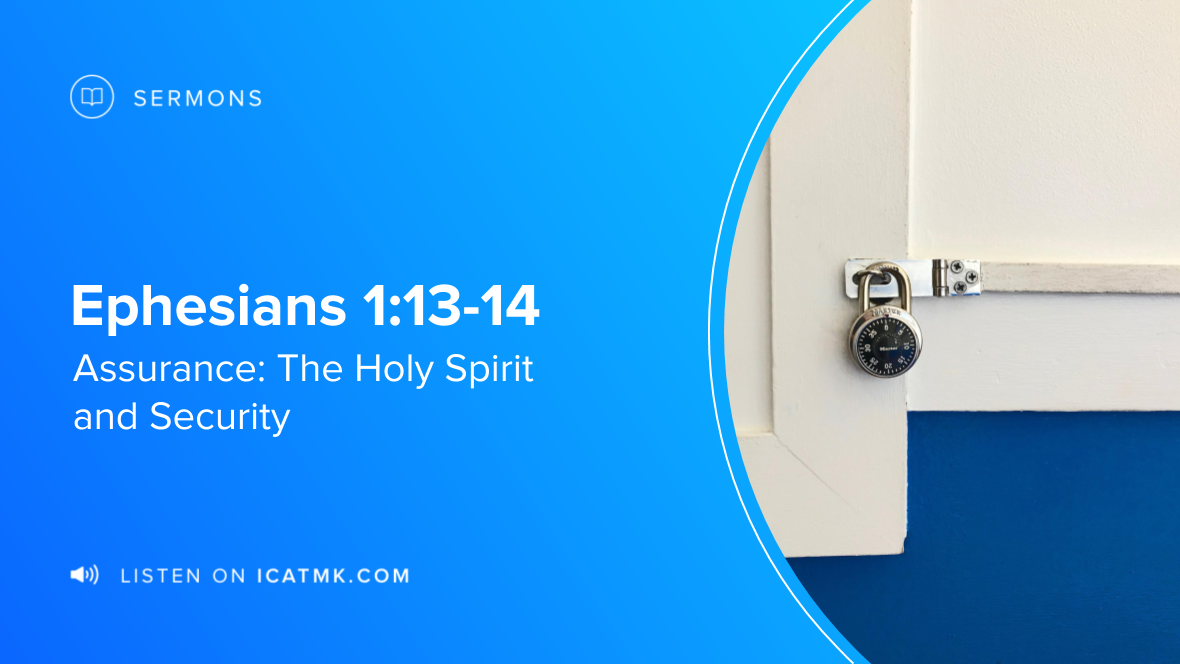 (For accuracy of this transcript, please refer to audio file of this sermon)

In pre-modern eras, the methods of communication looked very differently, then they do today, with all of the electronic means that we have to communicate. Every generation before this one, of course, was without the Internet and most generations before our own were without things like a telephone or even electricity and so to communicate in most generations, prior to our own. You actually had to send a hand written communication and someone had to physically take that from your geographical location to the geographical location of the person that you wanted to communicate with. But if you were to receive such communication at that time, how would you know that it was genuine? How would you know that it wasn’t fake, that there wasn’t an impostor who was trying to trick you in and pretend to be someone else in the letter? Well, one way this could be prevented was by sending the letter with a trustworthy messenger and two. If I recognize the person bringing the letter, I know I can trust the contents of the letter but another way that cultures throughout this planet have used for hundreds and even thousands of years. Another way to verify communication was by placing a seal on the document. Often these seals were made with a ring, a unique, one of a kind, ring that it would have a symbol engraved on it. And you pour some hot wax on the document and then make an imprint with that unique ring forming this seal and this was used to verify the source to prove the authenticity of the communication that’s being given. The Bible says that the presence of the Holy Spirit is like a seal on the people of God. We’ve been talking about the Holy Spirit for the last two months. Now, together we’ve learned how the spirit is any eternal person fully equal to the father and the son, fully equal member of the Trinity. We’ve seen how the spirit was president creation, giving life and throughout the Old Testament, giving power to the people of God and speaking truth for the scriptures to be written. We saw how in Jesus came. The spirit anointed him, declaring that he was the promised one and then we saw on our conversion. When someone believes in Christ, because the spirit shines truth into their life, and then after that, we see the role of the spirit and in transforming us, making us like Jesus. We covered the difficult topic of blasphemy of the Holy Spirit. In the last two Sundays, we’ve talked about spiritual gifts. Now, much of what we’ve heard most of it, I trust, is actually reflected in the ICMK’s statement of faith (part C), the biblical doctrine that we as a church affirmed. Let me just remind us of what our doctrinal statement says about the Holy Spirit. The Holy Spirit is the spirit of God. Fully divine. He inspired holy men of old to write the Scriptures. Through illumination He enables men to understand truth. He exalts Christ. He convicts men of sin, of righteousness and of judgment. He calls men to the savior and effects regeneration. At the moment of regeneration He baptizes every believer into the body of Christ. He cultivates Christian character comforts believers and bestows the spiritual gifts by which they serve God. Through his church, He seals the believer unto the day of final redemption. His presence in the Christian is the guarantee that God will bring the believer into the fullness of the stature of Christ. He enlightens and empowers the believer and the church in worship, evangelism and service.

I do hope that from the sermon series the last two months together, we are more aware of who the Holy Spirit is. How he is at work in his church and in the world today and my prayer as Michael just prayed for us that in response to sitting under God’s word the last two months, ICMK, more and more will be a church that is spirit led. That his spirit filled that is empowered by the Holy Spirit as we seek to exalt Christ here in this city. Well, there’s certainly much more as we come to the end of this sermon series that we could talk about the Holy Spirit. The Bible talks a lot more about him than we’ve covered, but I think it appropriate end for our sermon series is to go to perhaps the most encouraging aspect of the holy spirits work in our life and what we’re going to see this morning. As we’ve already seen in our Saint, singing and in our Scripture reading. Is this because the Holy Spirit has been given to us as believers, we can know that we are saved. We can have assurance of our eternal salvation because the spirit has been given to us. We’re going to see that in Ephesians 1:13-14 encourage you to turn there in your Bibles, looking at versus 13 to 14, and as you do notice that these verses, we’re going to look at are actually reflected in this final paragraph. We just read from our doctrinal statement telling us that the Holy Spirit seals and the Holy Spirit is our guarantee. We’ll look now to God’s word and explain this further. I read Ephesians 1:13-14 (verbal reading). Lord willing, at two weeks from today, we’re going to start our new sermon series on the Book of Ephesians. So, I’m actually not going to explain much of the context right now. We’ll save that for a couple of weeks from now. Then will go into depth in this chapter but just notice that verse 13-14, here are the final that the end of an opening hymn of praise that begins in Ephesians 1:3-14 (verbal reading of verse 3) and then the next 11 verses. I’m excited to get into this together is God’s people. The next 11 verses start explaining all of these spiritual blessings we have right now in Christ, including at the end here what we’re looking at this morning, the blessings of the personal work of the Holy Spirit in us. What we find in the two verses I just read for us are two illustrations, seal and guarantee that will use them for this basic outline to work through this morning. The presence of the Holy Spirit is like a seal declaring God’s ownership, declaring to whom we belong and then. Secondly the presence of the Holy Spirit is a guarantee promising eternal blessing to us. The verse begins in him, and clearly from the context him is Christ. Fact, we could say the theme of the book of Ephesians is what it means to be in Christ. To be in him will leave that again for future weeks to learn the definition of a true believer throughout this hymn of praise Paul. Several times that said in him, we, as believers in general, have these blessings. But at the end of the hymn of praise, he turns and makes it personal and so specifically now, to you readers. The church there in Ephesus, specifically you also these blessings are for you, too. Notice Jesus is for all people in general, but he’s also for you individually notice how he makes it even more personal. In addition to saying you also when you heard that’s how he calls this Gospel, he refers to the Gospel of Your salvation. Yes, it’s the Gospel of Our salvation, of course, but it’s also the Gospel of Your salvation. Do you ever talk like that? Do you think like that? It’s the Gospel of My salvation, the gospel of Alison’s salvation. It’s the gospel of Paul’s salvation. It’s the gospel of Travis’s salvation. You see that the personal nature of the spirit, taking the truth of Christ and speaking to our hearts as individuals that the Gospels not supposed to be theoretical. It’s extremely personal. It’s extremely practical. The gospel changes me, the gospel re-orients your life. It saves us from our sin and our shame and the judgment we deserve. The gospel is our gospel. It’s the gospel of your salvation. Speaking of these personal terms, he speaks to the believers there in Ephesus and he says in him, you also when you heard the word of truth. And as we ponder the emphasize, he makes here on them, hearing this gospel, we’re reminded why evangelical churches like ICMK, so emphasized preaching and it’s not because preachers just have something amazing to share, we should listen to. No, the reason evangelical churches emphasized the preaching, declaring of the word of God is because this is what God has ordained. God has declared that the main way we come into relationship with God, the main way we stay in fellowship with God is by hearing truth and by believing the truth that God speaks to us through his word. So, you see both of those elements you also, you heard and you believed what you heard you recognize that it was truth. It was truthful. The message proclaimed to you, and this is really important. You can’t separate these two. Coming to Jesus for salvation means coming to truth.

Now we have to realize how strange that sounds to too many people who are not followers of Jesus in our world today. Human philosophies throughout the centuries, they come and go and they gave different definitions of knowing truth and knowing yourself. But generation after generation, throughout the millennia, regardless of what the philosophies have said, God’s word has stood firm and God’s word has declared this. There is such a thing as truth. There is such a thing as absolute eternal truth that’s based on the very character of God on the very character of the creator of this universe, and this creator shares this truth with us. He’s shared this to us through his son, Jesus, who came declaring truth. He shares this with us through his eternal word, the scriptures, which declared the truth of God. So, I just want to say if you’re not quite sure, you will agree with my statement about there being absolute truth, I encourage you just explore. What does the Bible claim about truth and compare with the Bible claims with other religious claims? Compare what the Bible says with what a secular and philosophical explanation of realities might be out there, seek them, compare them. But most of all, seek to hear what Jesus says about himself, seek to hear and understand what Jesus says about why he came to Earth and why there was a cross on which he died.